Game Logs
Arriving on the scene in unprecedented fashion, Tom Barrasso became the only goaltender in history to make the jump directly from high school to the NHL without playing a single game of major junior, college or minor pro hockey first.
He made his debut at the age of 18, having just come off a 22-0-1 season for the Acton-Boxborough Colonials in his native Massachusetts, when he suited up for the Buffalo Sabres, who had drafted him 5th overall in 1983. He made the transition to the NHL in fine style, playing in 42 games and posting a 26-12-3 record with a 2.84 goals against average, which earned him not only the Calder Trophy as NHL Rookie of the Year, but also the Vezina Trophy as the top goaltender that season as well, a truly remarkable achievement for someone not only so young, but so inexperienced. It was only the third time a player had won both the Calder and Vezina in the same season after Frank Brimsek and Tony Esposito.
Barrasso would play three additional seasons in Buffalo, including playing in the 1987 Canada Cup for the United States, before beginning the 1988-89 season by playing 10 games for the Sabres before being traded to the Pittsburgh Penguins, a team on the rise with the arrival of Mario Lemieux in 1984. Barrasso would nearly equal his previous playoff experience of 12 games with Buffalo over the course of five seasons with 11 playoff games with the Penguins in 1989 alone.
Tom Barrasso wore this road set jersey for five games. In that span he posted a record of 1-2-2. He held a save percentage of 0.863 while making 120 saves on 139 shots. The jersey has 93-94 written in sharpie inside the rear hem. There are a few visible puck marks throughout. The fight strap has been cut out of the jersey. There is also slight pilling along the left side of the collar of the jersey. Typical of Barrasso game used jerseys. 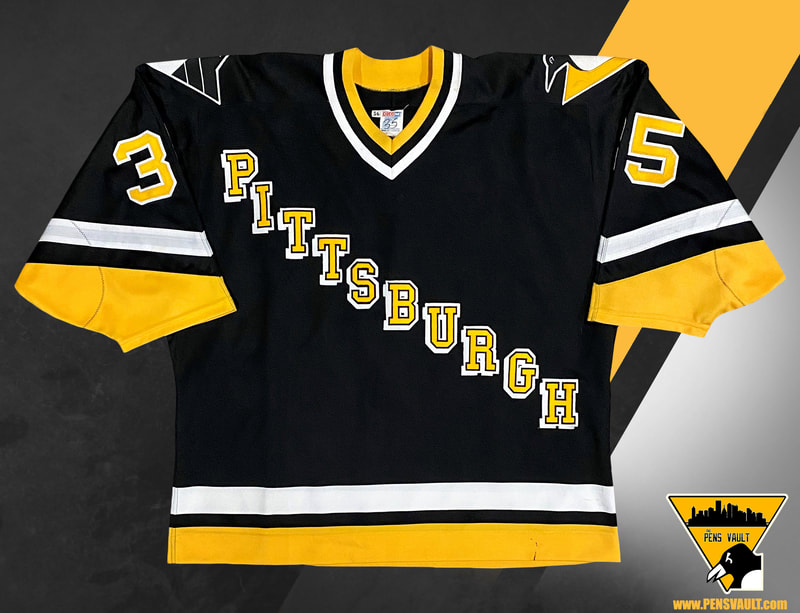 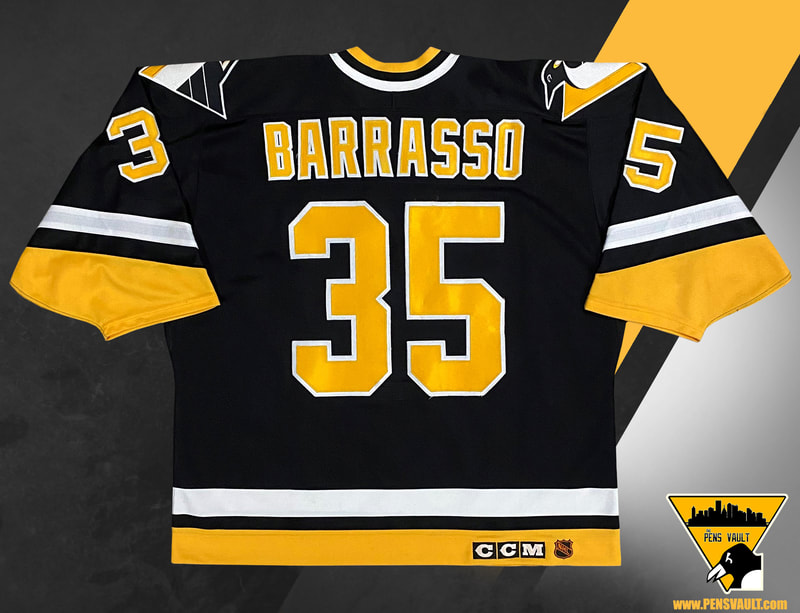 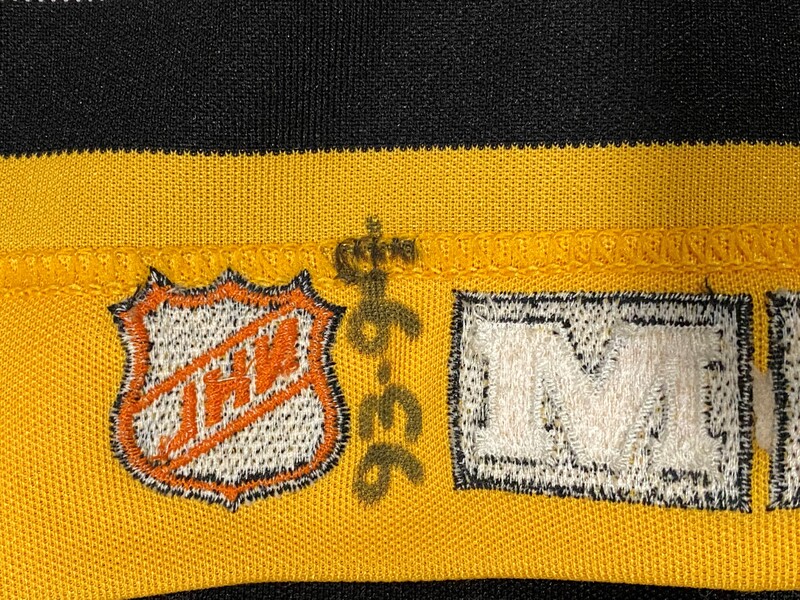 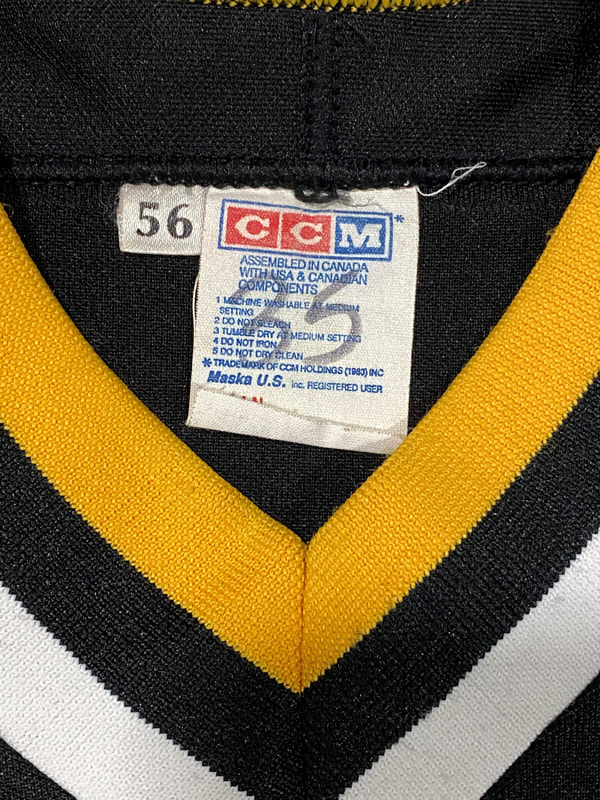 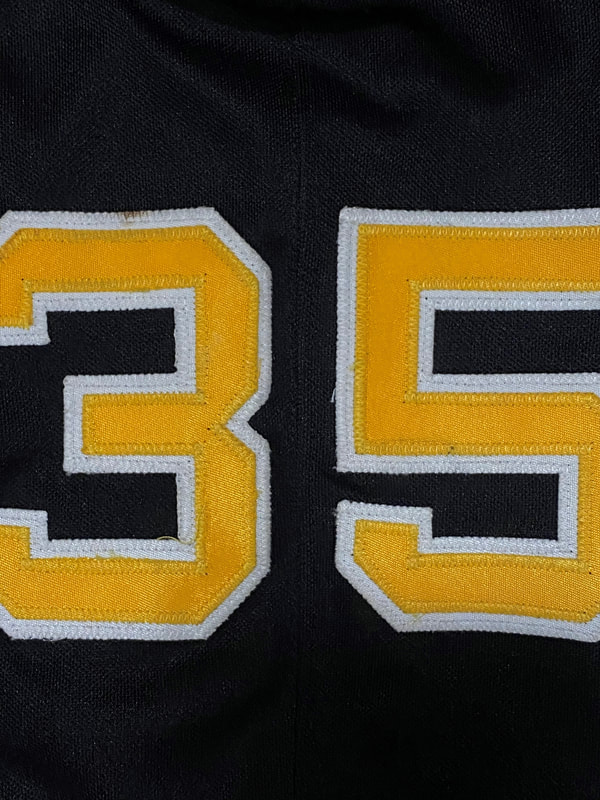 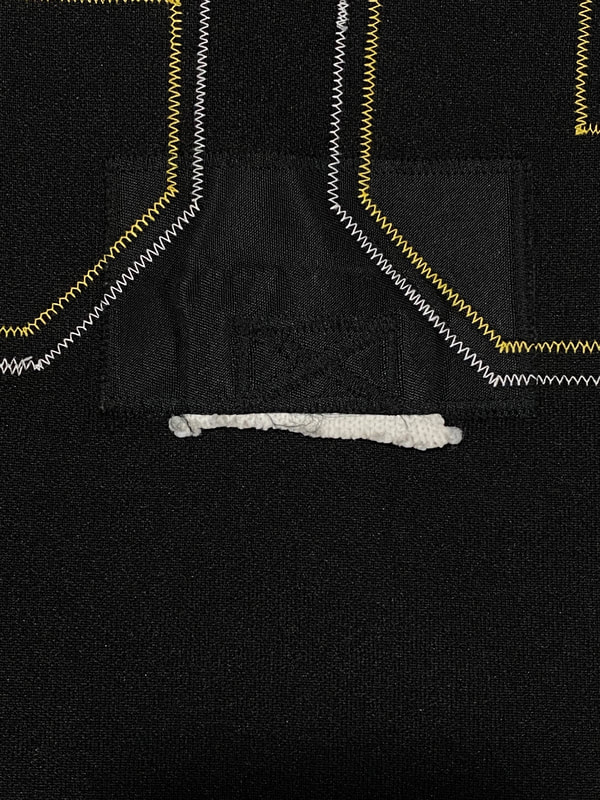 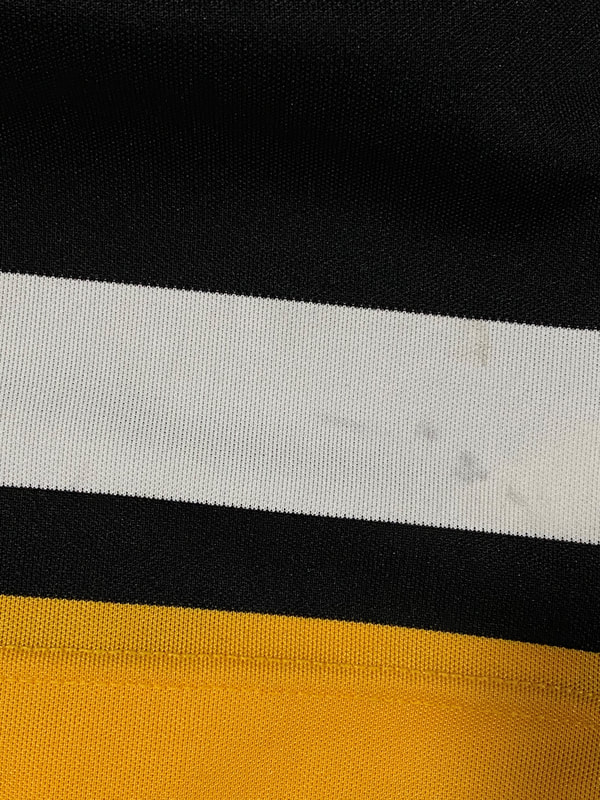 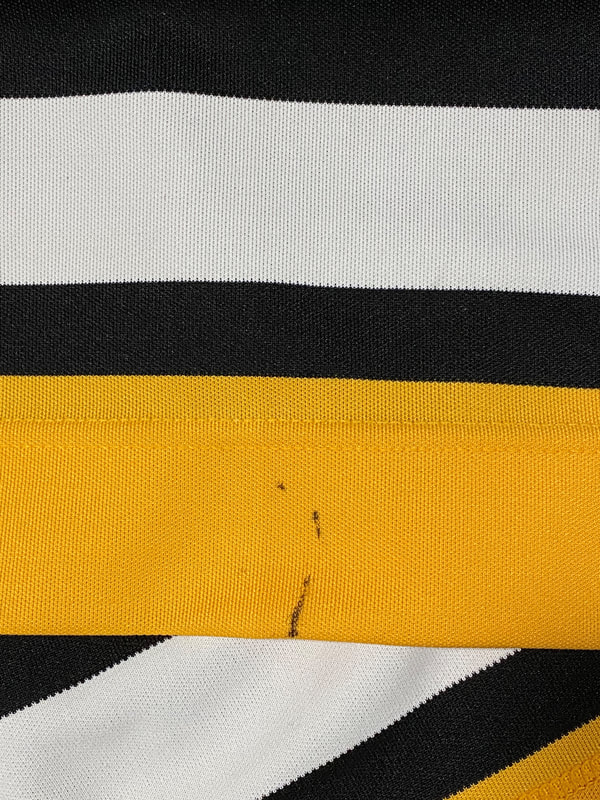 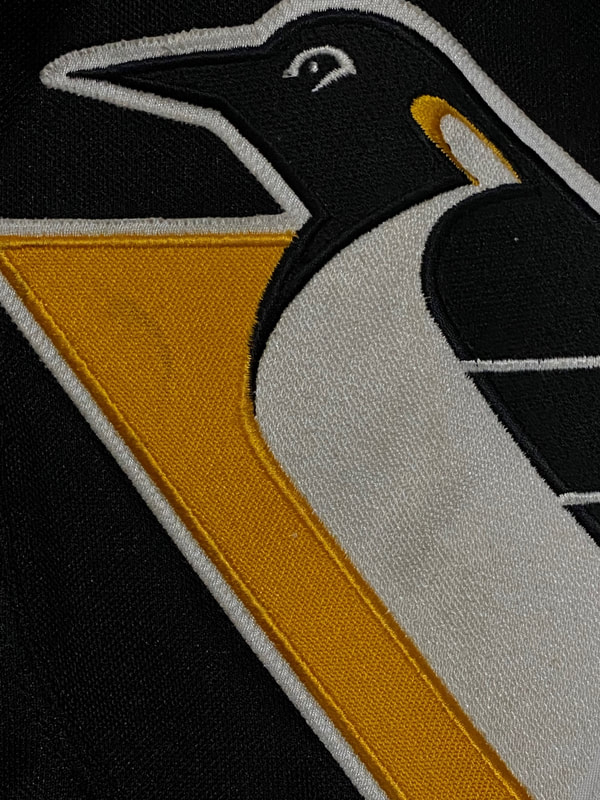 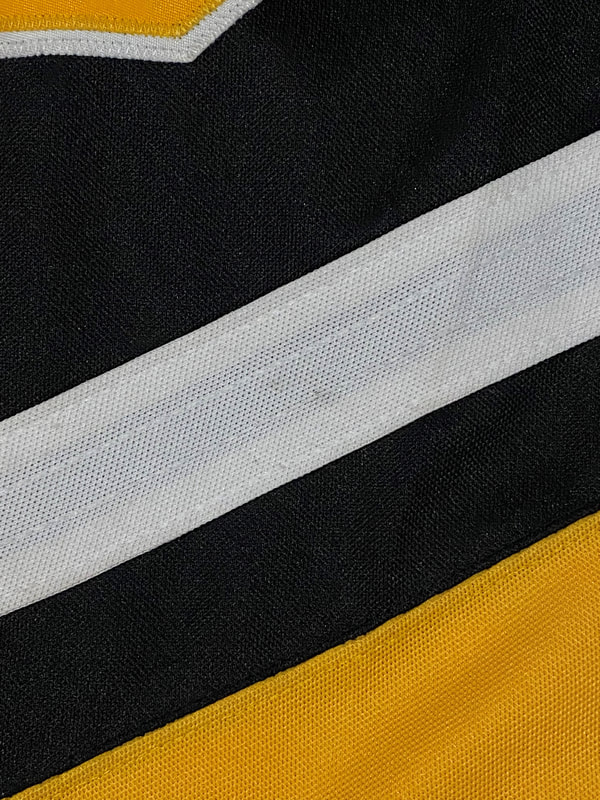 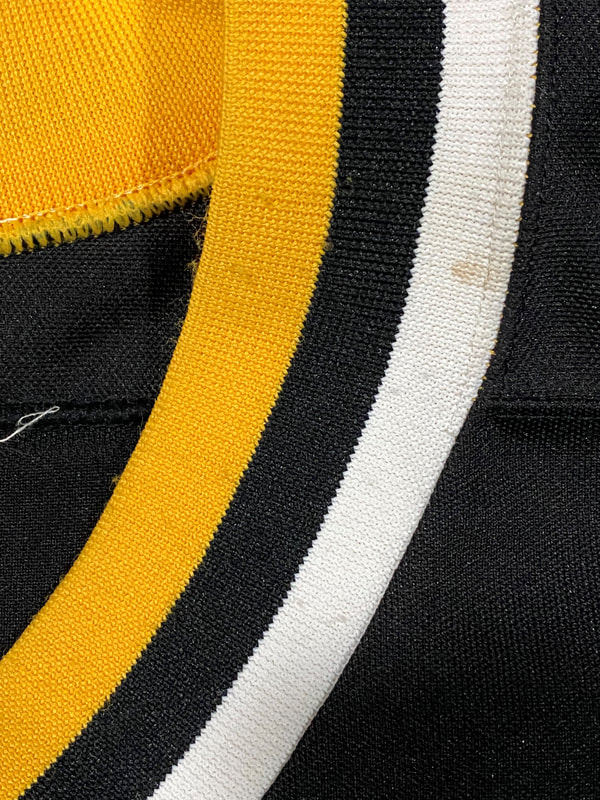 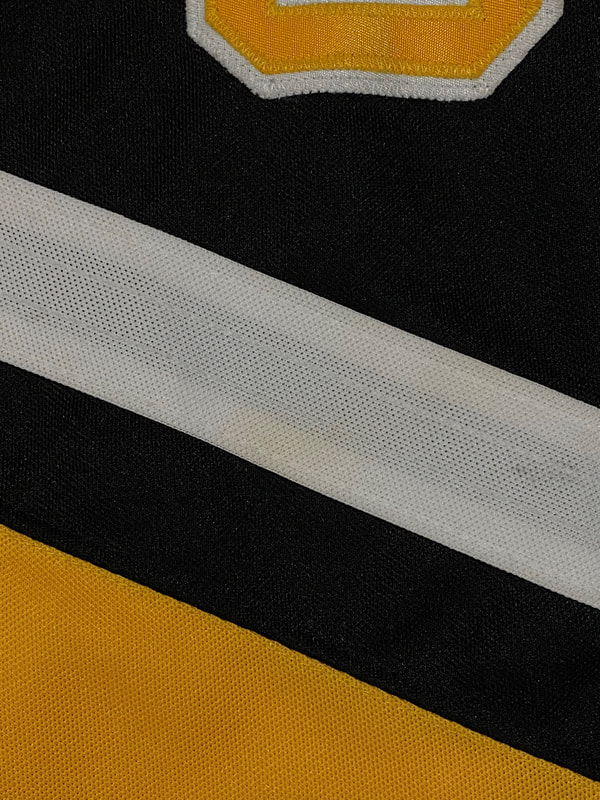 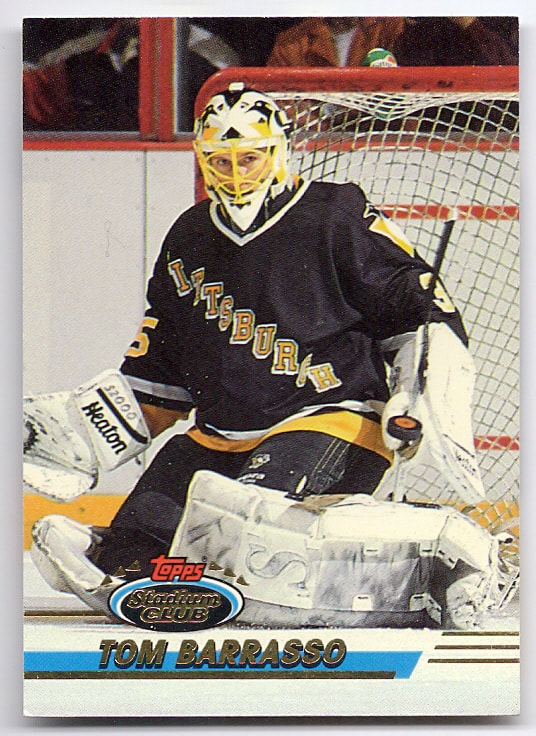 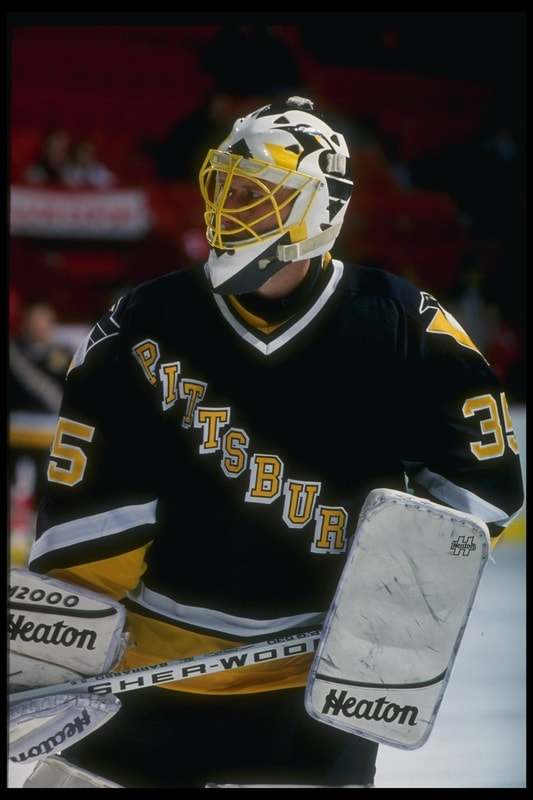 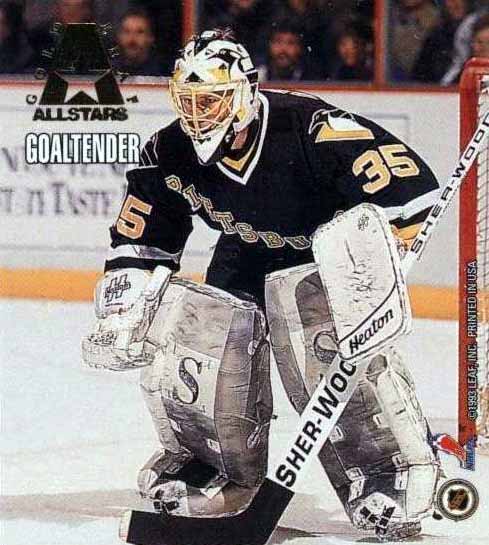