Game Logs
Matt Cooke was drafted by the Vancouver Canucks in the sixth round of the 1997 NHL Entry Draft, held in Pittsburgh, PA. He played his first game on October 14, 1998 against the Edmonton Oilers. With his contract set to expire at the end of the 2007-08 season, Cooke was traded at the deadline from the Canucks to the Washington Capitals.
In the off-season, on July 5, 2008, Cooke signed a two-year, $2.4-million contract with the Pittsburgh Penguins. On December 2, 2008, he was named to the rotating position of alternate captain for the Penguins for the month of December. Cooke was a member of the Penguins 2009 Stanley Cup winning team.
Matt Cooke wore this home set 1 jersey for 4 games throughout the month of December. He recorded two assists and logged four penalty minutes over those games.

CAREER ACHIEVEMENTS
Game Logs
* - Denotes "did not play due to Injury"
Worn in Warm-ups Only (Injured)
The Pittsburgh Penguins were slated to kick off the 2008-09 NHL season in Stockholm Sweden. They were part of the NHL Premiere series, slated to play a two game series against the Ottawa Senators at Globe Arena on October 4 and 5 2008. The Penguins played visitors to the Ottawa Senators on October 4, wearing their road (white) uniforms. The very next night the Penguins had the designation as the home team, wearing their home (black) uniforms. Prior to their two game series against Ottawa, the Penguins played a final pre-season game against Finnish team Jokerit in Helsinki. The Penguins wore their home (black) uniforms for that game.
Petr Sykora was unable to play in the NHL Premiere games due to injury. He did skate in the pre-game warmups in Helsinki on October 2nd to test out his injury. Sykora was ultimately ruled out for the contest. Sykora signed this jersey after a morning skate at Mellon Arena. The jersey features the NHL Premiere patch as well as a special set tag indicating the dates of the game. 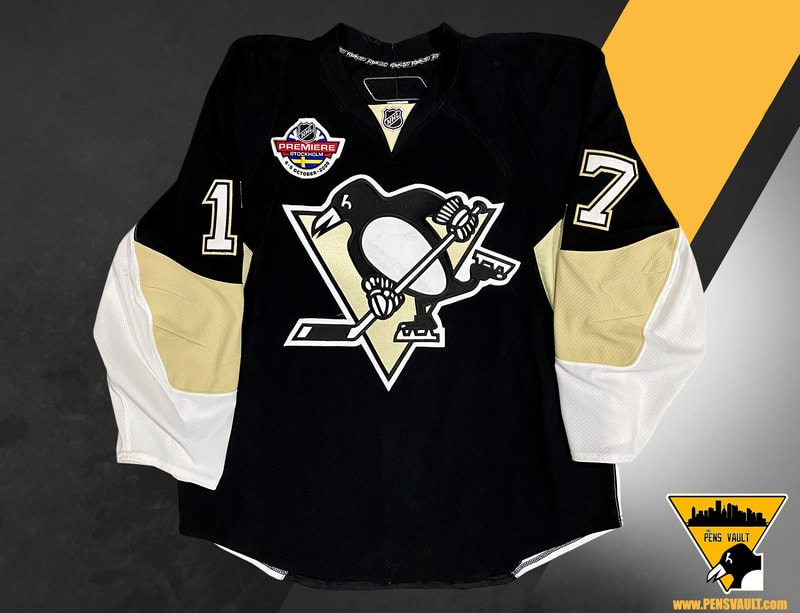 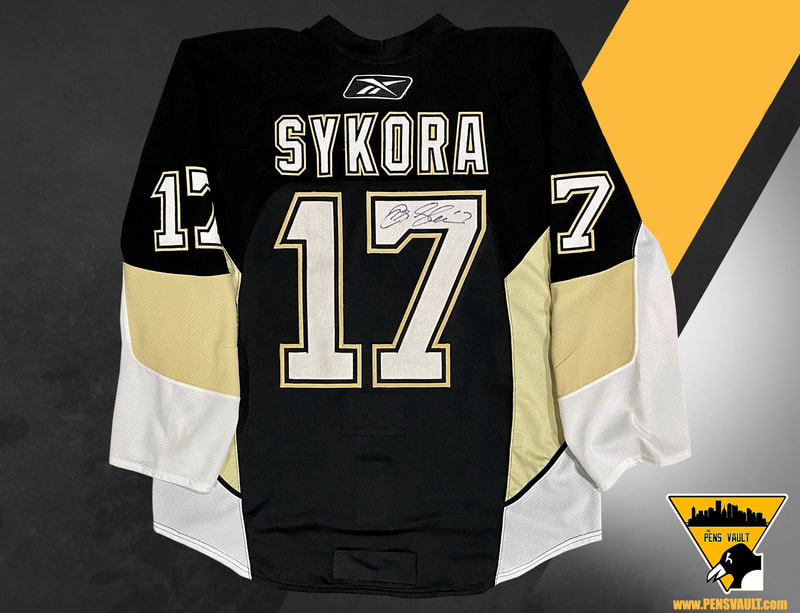 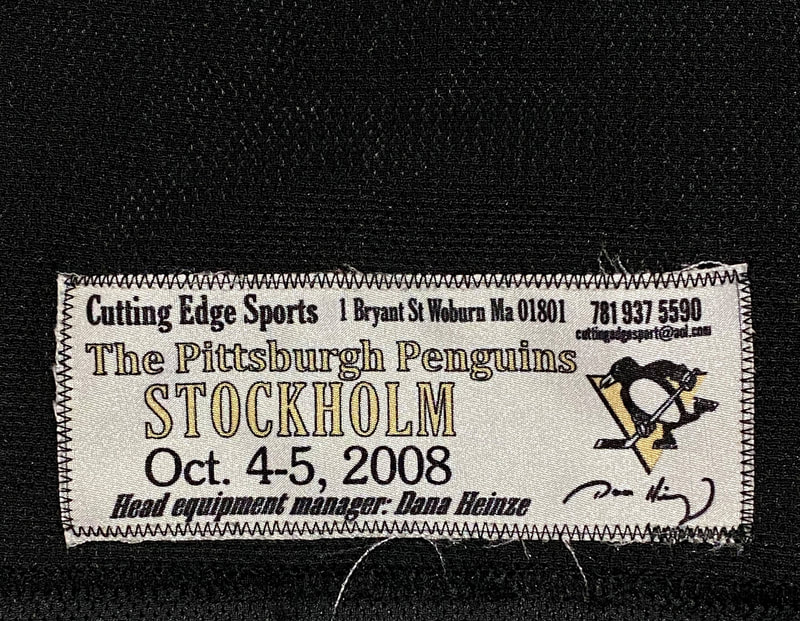 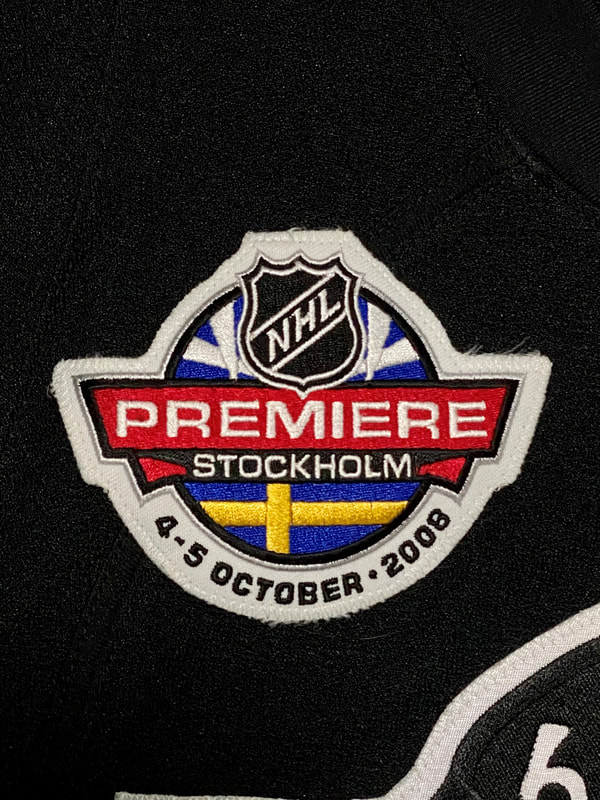 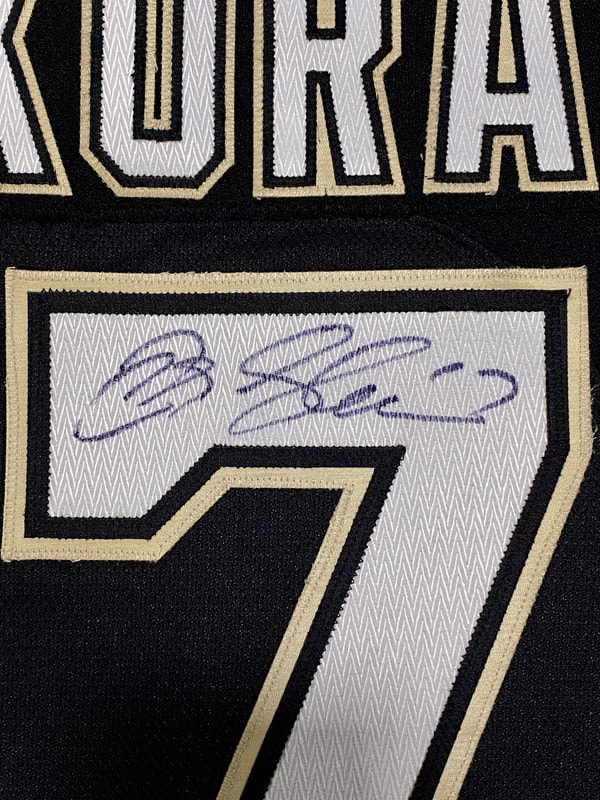 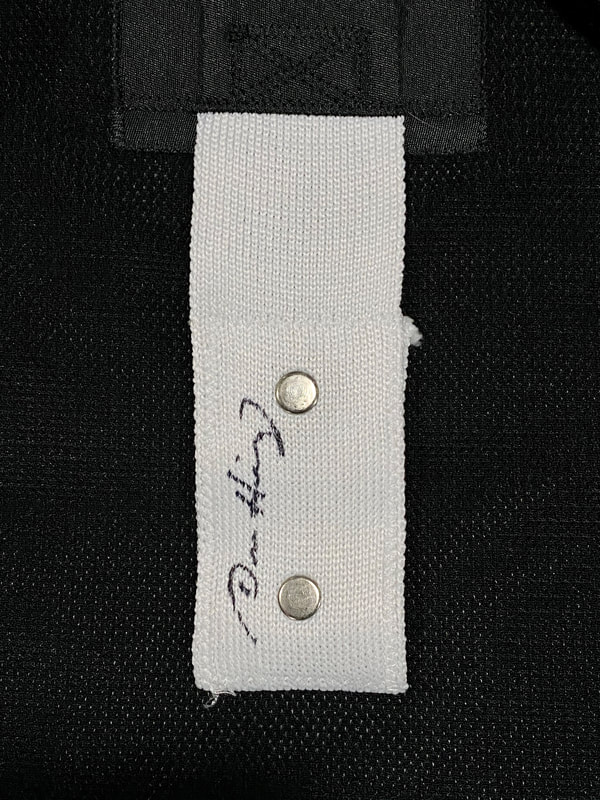 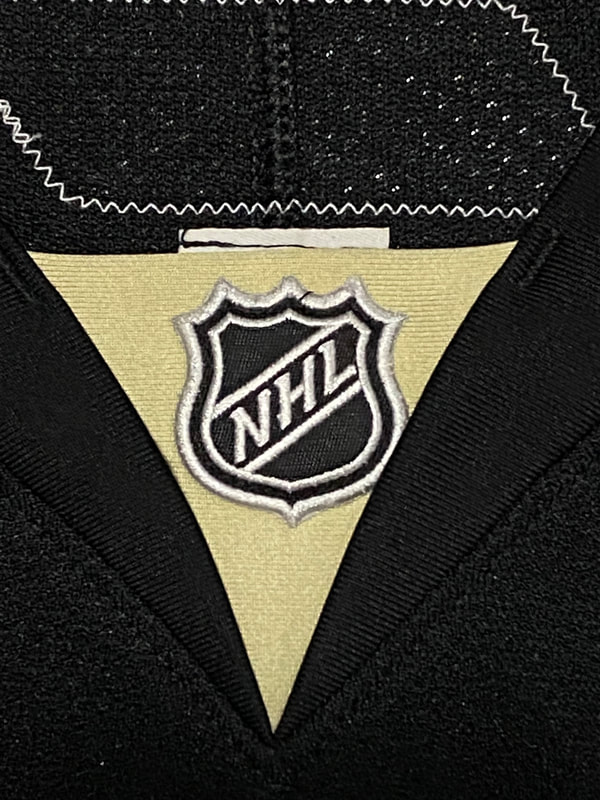 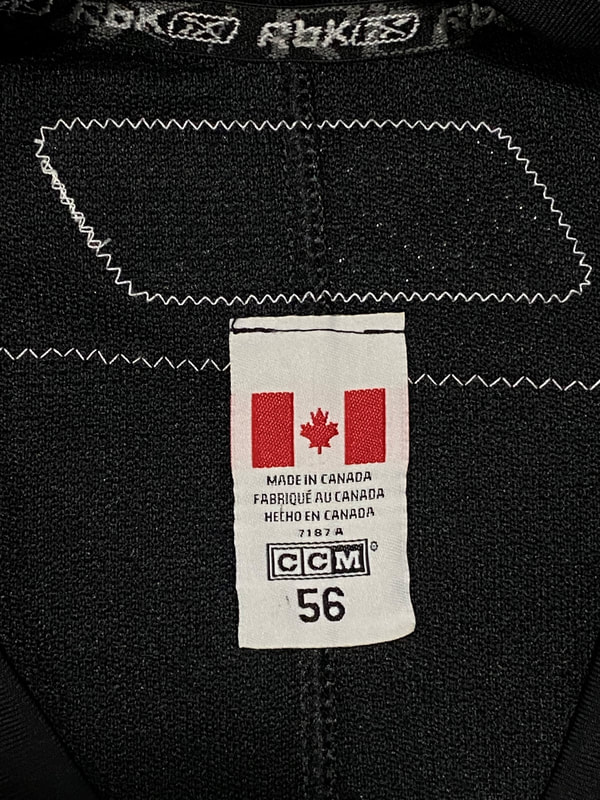 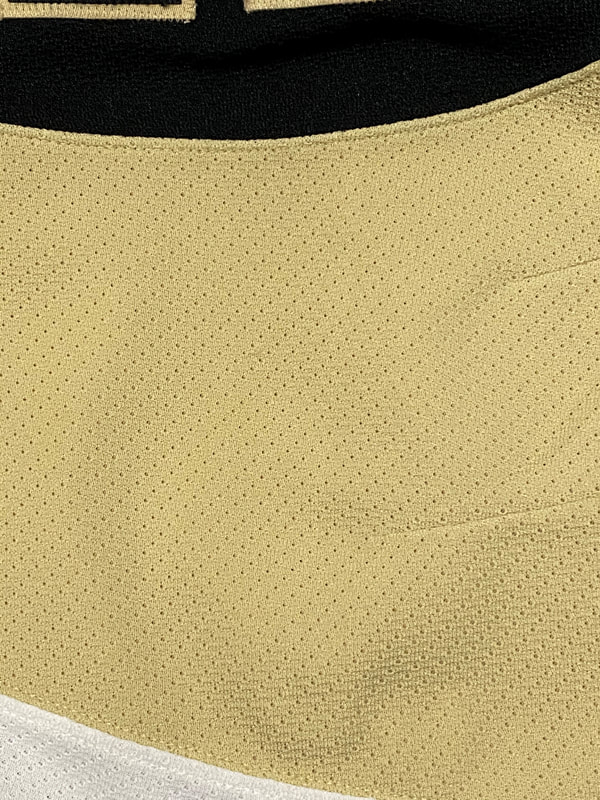 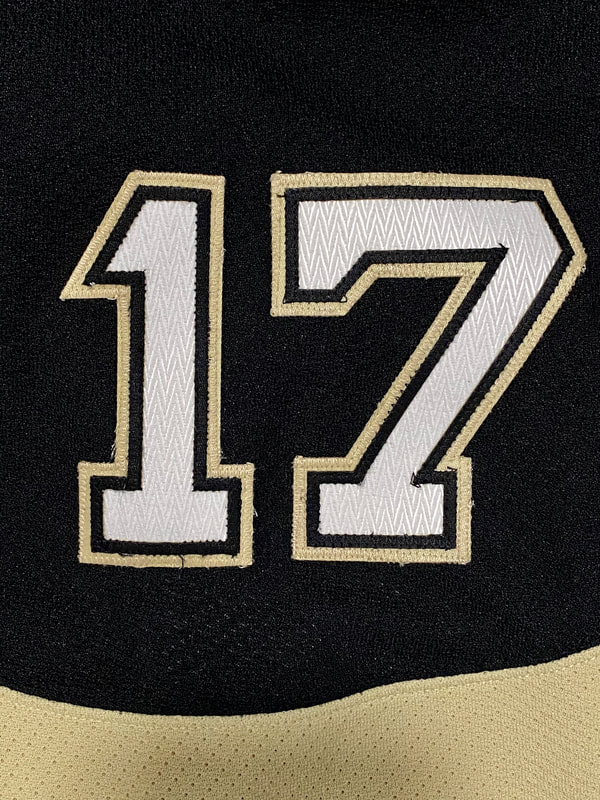 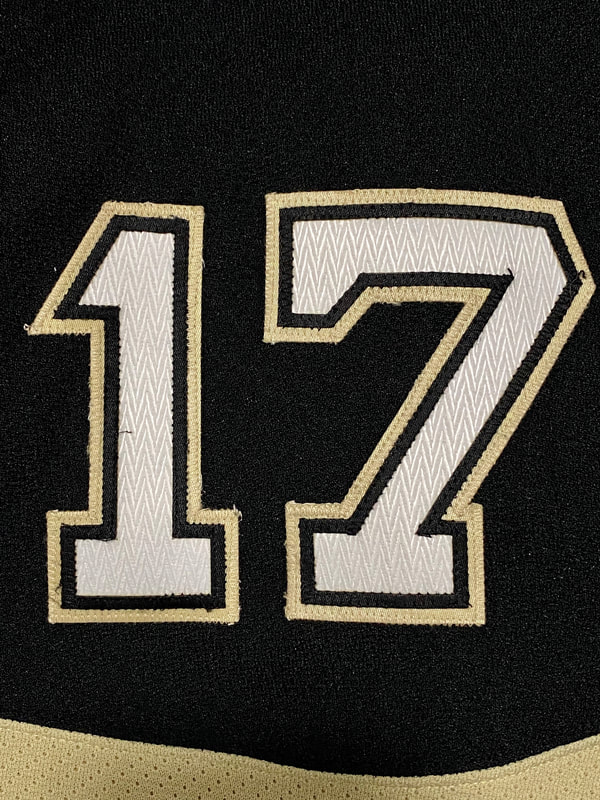 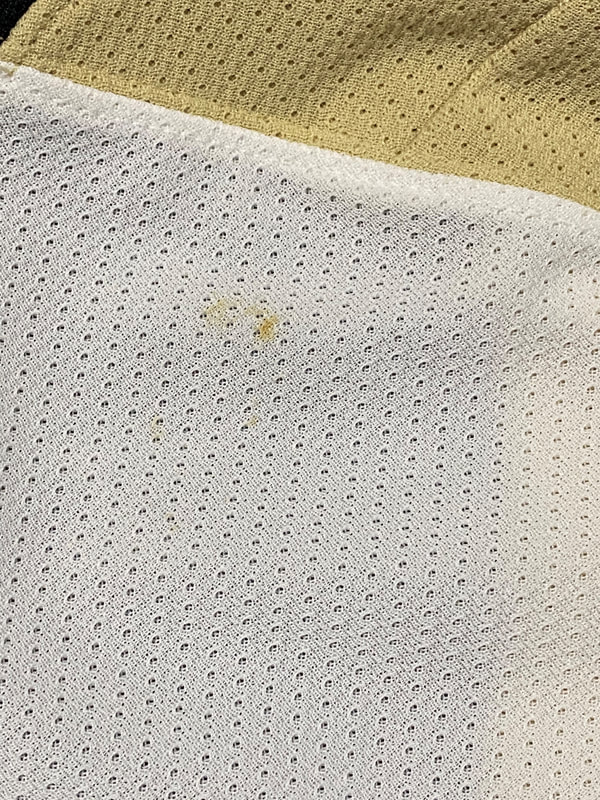 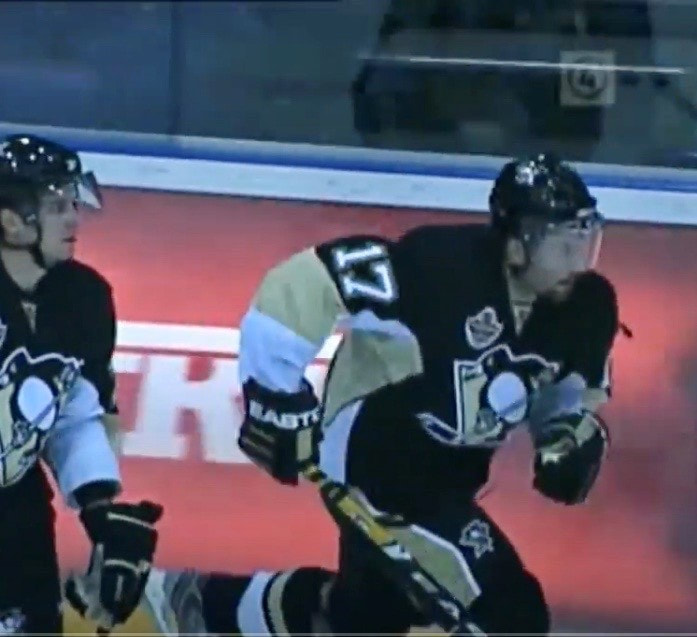 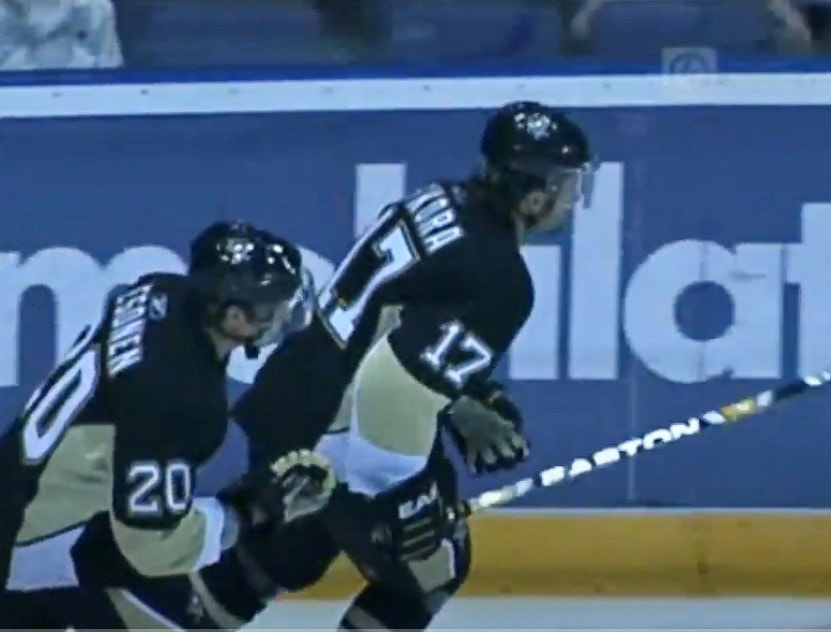 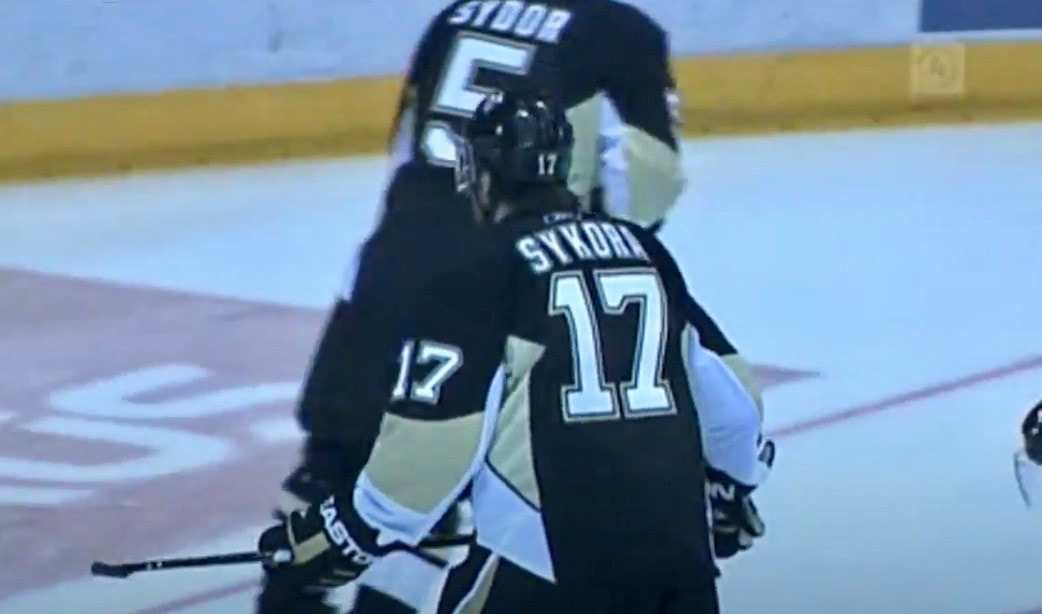 CAREER ACHIEVEMENTS
GAME LOGS
1st Career Hat Trick Jersey
Petr Sykora was drafted by the New Jersey Devils, 18th overall in the 1995 NHL Entry Draft. Petr scored 42 points with the Devils during the 1995-96 Season, his rookie year. Sykora was traded to the Anaheim Ducks to start the 2002-03 season. During the 2005-06 season, Sykora requested a trade. He was subsequently sent to the New York Rangers. Following the 2005-06 season, Sykora signed a one year deal with the Edmonton Oilers. In July of 2007, Sykora signed a two-year contract with the Pittsburgh Penguins.
Petr Sykora held the NHL record for most two goal games without scoring a Hat Trick (38 games). On December 11, 2008, Sykora finally ended the streak. Petr Gun netted three goals in Pittsburgh's 9-2 rout of the New York Islanders.
Sykora wore this home set 1 jersey for twelve games. In that span, he recorded fifteen points (8g,7A). Among those games was his 1st career hat trick.
After the Penguins won the cup, Sykora decided to move on to Minnesota in free agency. He wrapped up his career in the city where it all began, New Jersey. Sykora Signed a one year deal with the Devils during the 2011-12 season. After coming up short in the Stanley Cup Finals against the LA Kings, Sykora decided to hang up the skates. Petr finished his NHL career with 323 goals, 398 assists, and 455 penalty minutes, in 1017 games. He made 5 appearances in the Stanley Cup Finals, winning the Cup in 2000 and again in 2009. 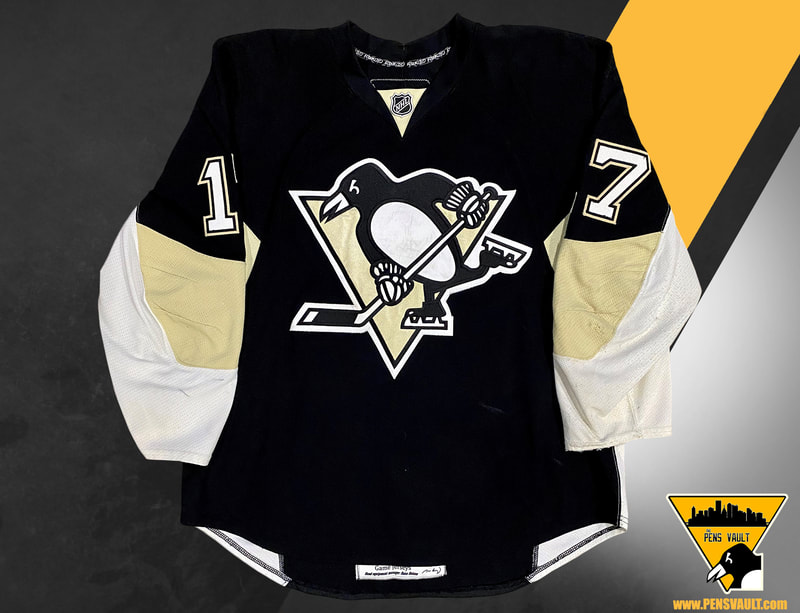 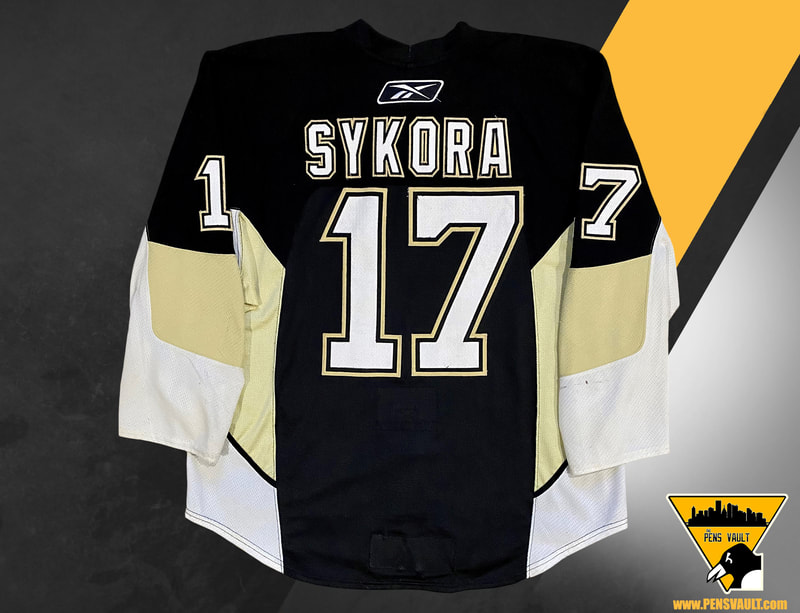 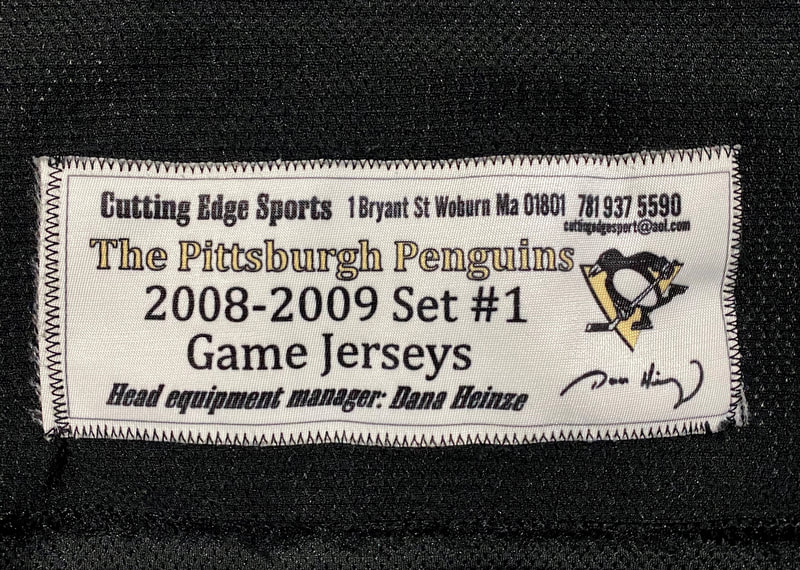 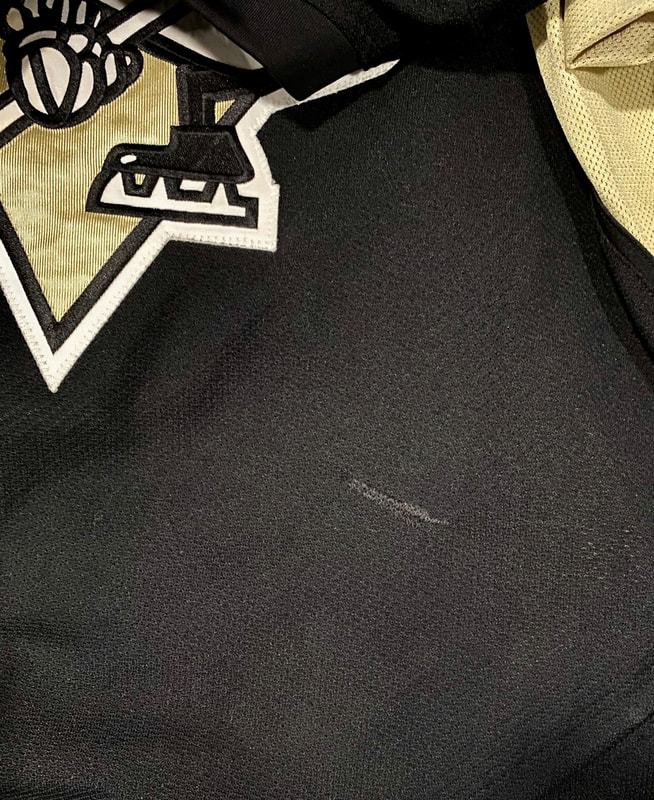 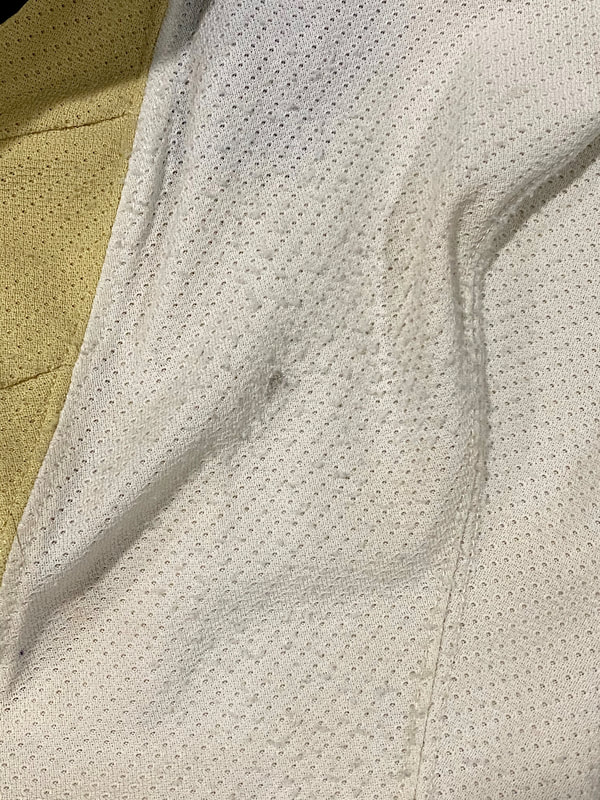 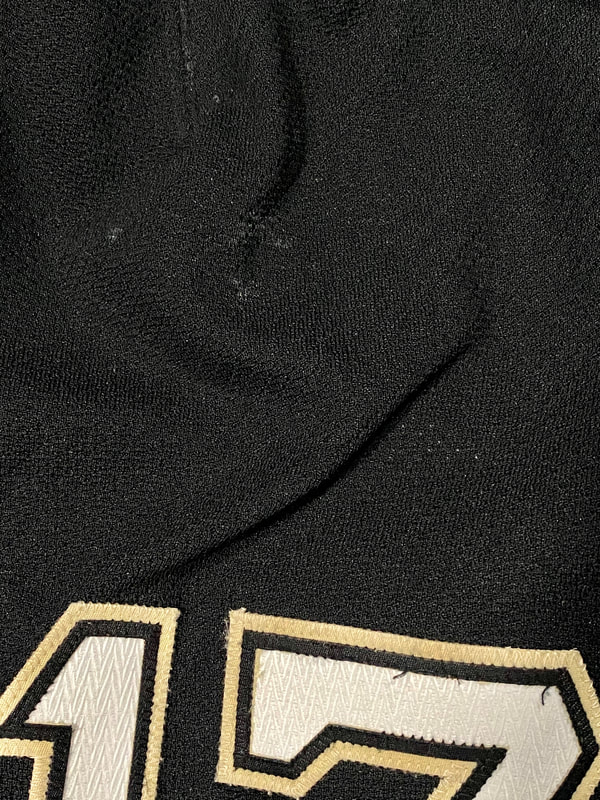 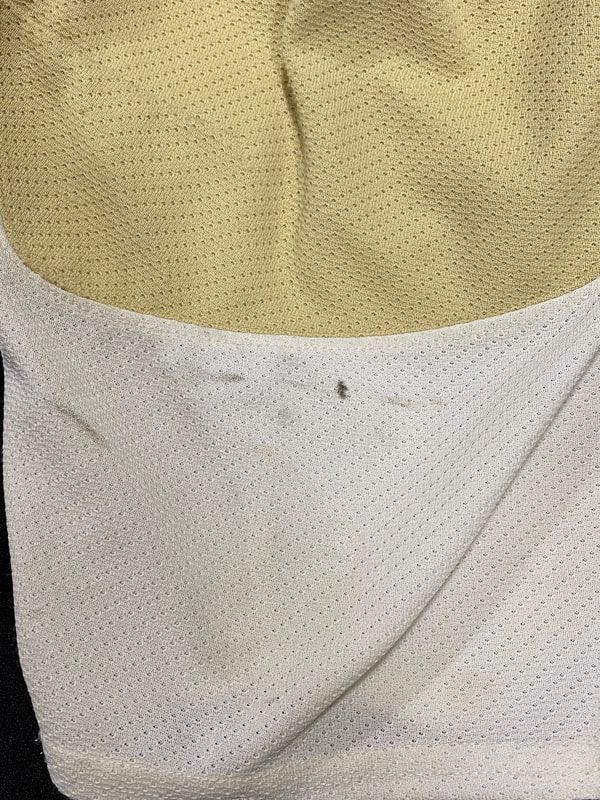 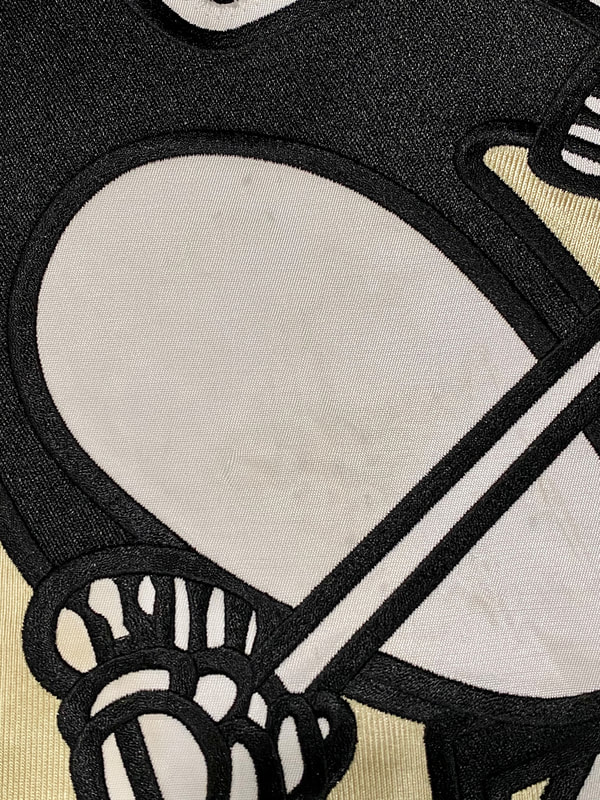 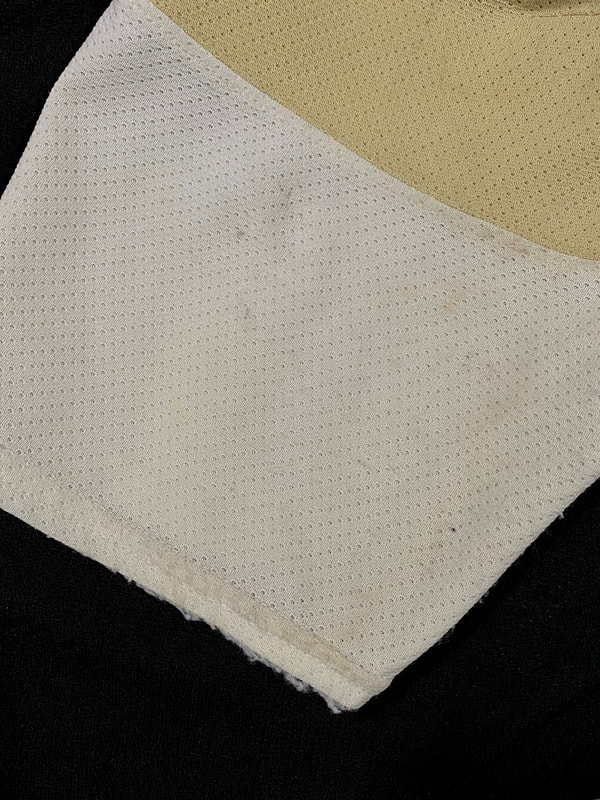 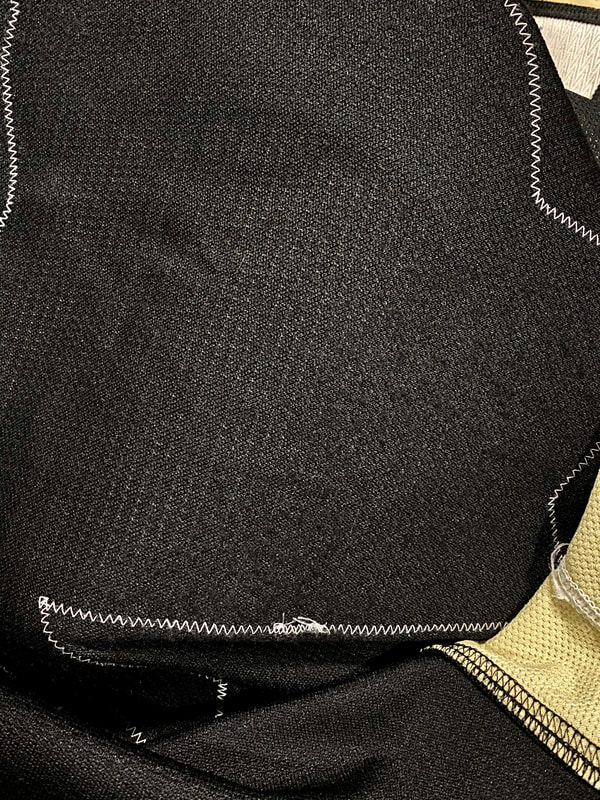 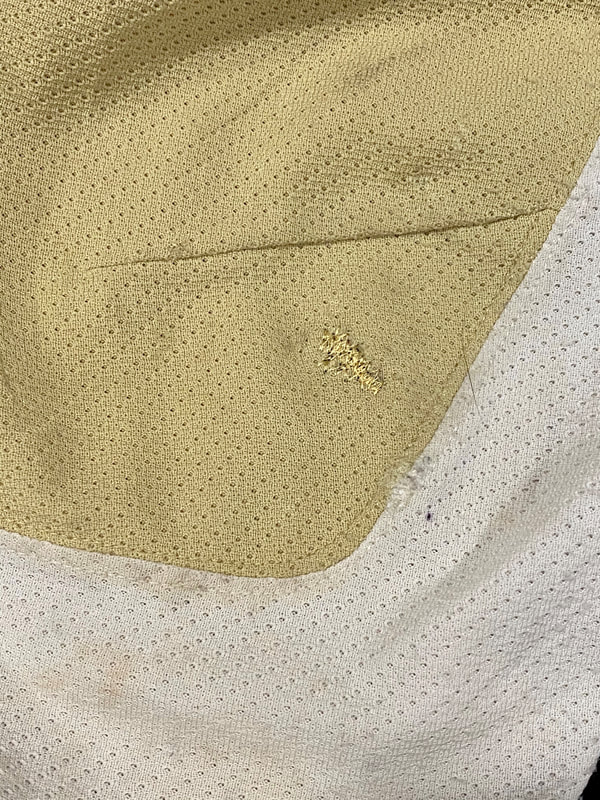 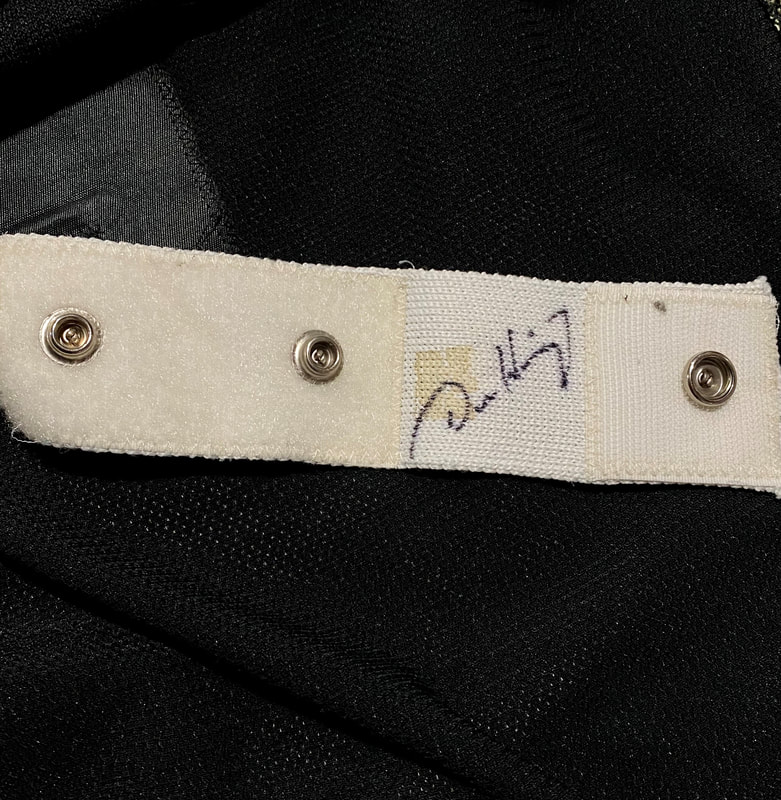 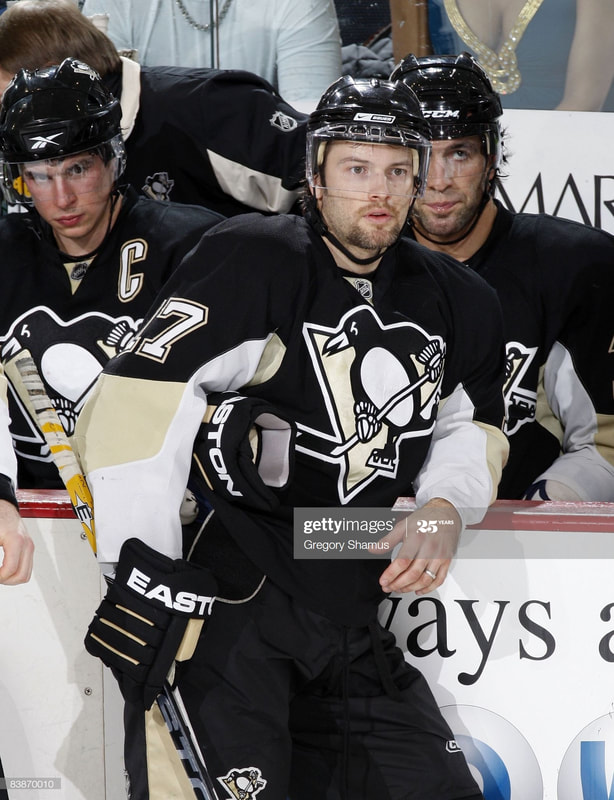 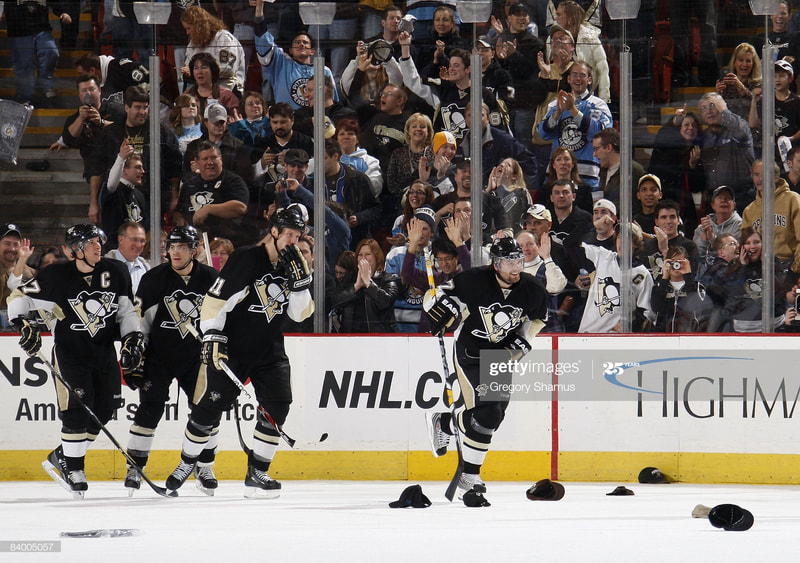 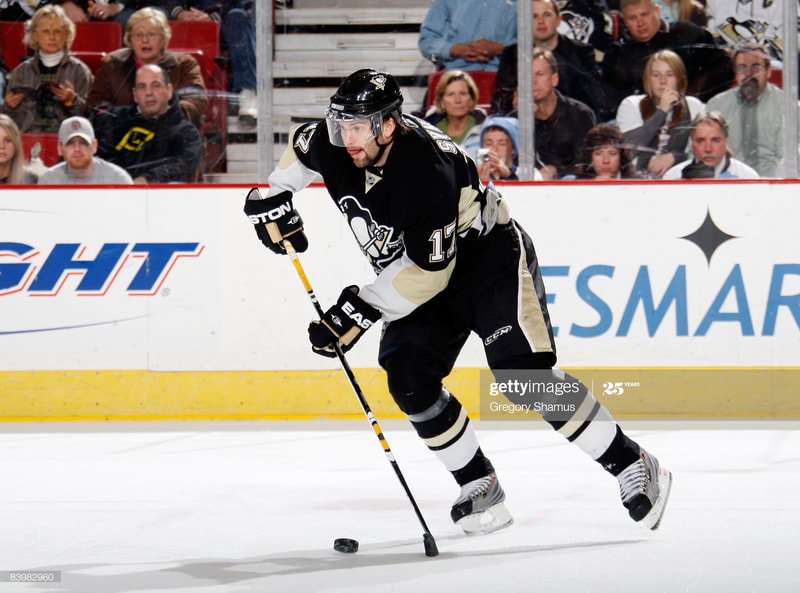